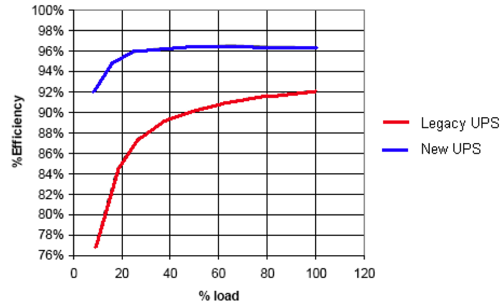 Refreshing legacy UPS (Uninterruptible Power Supply) will bring energy savings and efficiencies, for example a legacy 40kVA UPS unit can be up to 58% less energy efficient than a new unit. Upgrading and refreshing will overcome this and will mean savings of up to £3,000 in energy costs per year and a reduction in carbon emissions.

“There are many benefits to upgrading and refreshing legacy UPS, many of which are around energy efficiency. Let’s face it, power is expensive and no one wants to spend more than they have to with their mains power provider. UPS technology has moved on massively in the last few years, meaning there are considerable savings to be had from upgrading dated equipment with newer, energy efficient replacements. It is possible to calculate an accurate return on investment (ROI) for how much energy is saved versus expenditure on the upgrade and this often creates a compelling business case to refresh the equipment.

One other area of saving is around how much heat is generated by the UPS. New units generate less heat, which means that surrounding air conditioning (AC) doesn’t need to work as hard. Cooling a room can be expensive and reducing the need to cool saves energy.

Older UPS are more challenging to support. Capacitors and fans need changing over time printed circuit boards can burn out and need replacing without any advanced warning, resulting in risk of unsupported loads. Not only will a more modern UPS save on power consumption and produce less heat but it will also be less likely to fail and will prevent additional, unnecessary maintenance for the air-conditioning and UPS unit.

Depending on the technology, the new unit will reduce energy consumption and costs, including savings on CCL (climate change levy) tax.

The CCL (climate change levy) is an additional tax for the use of non-renewable energy that public sector organisations pay directly through their energy bills, the aim is to encourage energy efficiency and reduce greenhouse gas emissions. The amount of tax directly correlates with the amount of fuel that is used so if the organisation can reduce its energy consumption, it pays a lower CCL.

IT and server equipment loads typically change every two or three years, yet legacy UPS units are often almost ten years old and offer poor power efficiency. New UPS can support much more than older ones; their output power factor is higher, closer to 0.9 for an energy efficient range, so you get more power for your money.

Our eKasar range is typically up to 96.5% efficient with an approximate output power factor of 0.9, and units show fewer losses. ?A traditional transformer based UPS system would offer an efficiency rating of circa 92% at 100% load, 90% at 50% load and 89% at 25% load.

New technology products such as the eKasar range would produce energy efficiency ratings of 96% at 100% load, 96.2% at 50% load and 95.7% at 25% load. The efficiency savings are particularly relevant on installations where an N+1 philosophy has been adopted, as in these situations the UPS are rarely operating above a 50% loading.

New units are often a lot smaller due to the transformer based technology inside the product. The units are IGBT rectified (insulated-gate bipolar transistor), which ensures high efficiency for fast switching between units.

New units can free up valuable space in a computer or server room and can make co-location applications much more profitable as there is more rack space to sell. Carbon footprints are also minimised by installing and utilising energy efficient power.

As with any product, the older the equipment, the higher is the risk of component failure. Fan failure and internal control board, or power board failures are particularly common amongst older units, and age-related failures increase with any legacy unit.

Mean time between failures (MTBF) increases with newer UPS units, which is a good indication of their increased reliability.