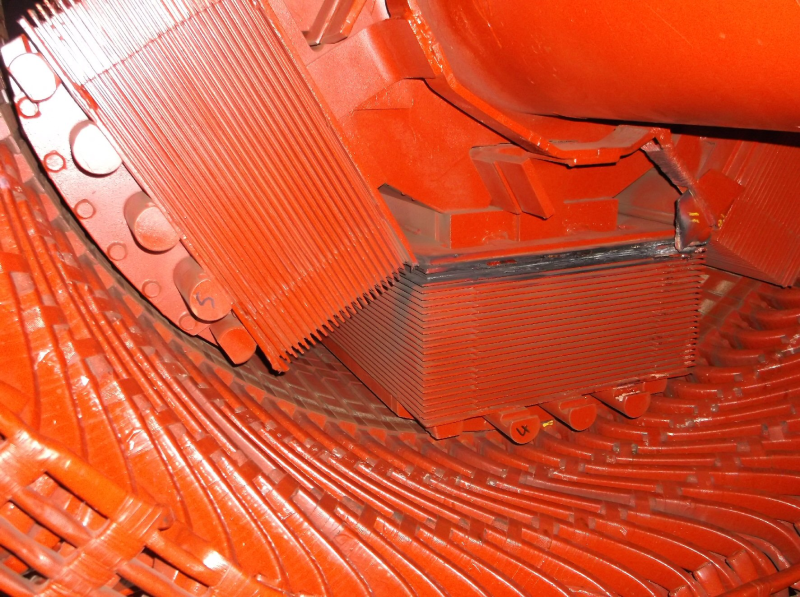 When Quartzelec’s Swansea facility received an emergency call from Tata Steel Mill in Port Talbot stating that they had experienced a failure on their vital Stand 3 machine; its emergency ‘electrical’ services team immediately swung into action and an intense period to resolve the problem ensued.  Initial inspection identified that pole connections had fractured and more significant damage may have also been sustained.

As the repair could not easily be dealt with on-site, Quartzelec arranged for the 7MW, 36 tonnes machine to immediately be transported to its Rugby facility and upon arrival later that night, work started on removing the damaged rotor. Closer inspection and further testing confirmed that two poles required replacing and the necessary spares were made available free issue from Tata.  A further and more serious fault was also identified; a cap head bolt had sheared inside the machine causing significant damage to the stator core and windings.

While the initially identified damage could have been sorted within a few days, this additional problem potentially meant extensive down time at the cold mill for Tata. Quartzelec, with the customers’ best interests always at the forefront, therefore devised a solution that would result in the site standing still for the minimum time possible.

The full inspection identified that a total of seven stator bars required replacing. Copper was ordered, existing schedules re sequenced; and the bespoke bars were manufactured in Quartzcoil – Quartzelec’s independent coil manufacturing facility. Detailed work was concurrently carried out on the core which involved physically separating damaged laminations and replacing failed top coils sides, elements were re-brazed and as soon as the new bars became available these were spliced back into the existing bars.

The machine was then reassembled and core flux tests completed to demonstrate the core heating was reduced to a level that wouldn’t prejudice the winding in the short term. The repaired winding was also subjected to a minimal impulse inter-turn and HV withstand tests to confirm suitability for limited further service until Tata could source a replacement motor.

With the effort and commitment of the Quartzelec workforce, working 24/7, this total process took less than three weeks to complete. The repaired unit was then shipped back to Tata and the Swansea team were again on hand to assist with its re-installation and alignment.  This was successfully completed and resulted in the unit being made fully operational and the Tata plant back to operational capacity.

Since the installation the machine has run faultlessly and Quartzelec has received the following correspondence from Tata:-“The refitted stand 3 motor was back in service just hours after being returned and we have since been running at full speed with no less restrictions than before. When our team at Port Talbot first saw the stator damage we were pessimistic about the possibility of repairing the machine but as time went on the Quartzelec team filled us with confidence and once again we saw what a class team of engineers we were able to access.”

Keith Evans, Quartzelec Swansea’s general manager added: “This was a ‘TEAM EFFORT’ utilising our people in Rugby and Swansea and clearly demonstrates what Quartzelec can do to help keep the wheels of industry turning. Our engineering knowledge produced a workable solution to ensure our client was operational as quickly as possible; our turnaround was fantastic. We pulled out all the stops right across the business and as a result have another satisfied customer.”

The Defence Industry Is A Great Space For Electrical Engineers