PV technology on the ‘Up’ 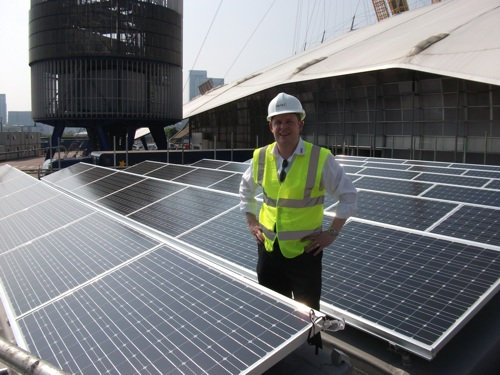 Photovoltaic inverters and a new mounting system, both supplied by Tritec Energy, are playing their part in reducing energy consumption and carbon footprint at London’s newest tourist attraction – ‘Up at The O2’ in Greenwich’.

The new venue enables visitors to literally walk over The O2 and admire the dramatic views from the top of this iconic building. To help minimise the energy and environmental costs of the project, the contractor, ISG, requested tenders for a roof-top photovoltaic power installation. With a bid proposing the use of technology supplied by Tritec, the contract was awarded to Middlesex-based Rayotec, a specialist in solar electric power installations and a long time user of Tritec solutions.

“Because The O2 is far from a typical roof shape, this was a bespoke project requiring extensive upfront design,” explained Alex Lenihan, senior project engineer at Rayotec. “Initially there was some discussion about having a fully integrated and seamless installation, but the cost was thought prohibitive. However, even though we moved away from this plan, aesthetics remained a high priority.”

Rayotec went back to the drawing board and duly shifted attention to the TS insertion profile of Tritec’s TRI-STAND mounting system.

“We hadn’t used this particular configuration before but upon scrutiny it looked seamless – there were no gaps between the panels and the system would also allow the contractor to flash right up to the frames,” added Lenihan.

The TRI-STAND insertion system allows quick and easy installation of all popular framed solar modules. After the insertion of the modules into the aluminium profile, the modules are held in place by their own weight and friction (the photovoltaic modules do not need to be screwed in). Tritec also supplied two 3-phase Kaco photovoltaic inverters.

The total size of installation was approx 22.75kW spread over two flat roof entrance lobbies on the south and north side of the dome structure. In total there were 49 photovoltaic panels on the south entrance roof, and 42 on the northern exit roof – each served by a separate Kaco inverter.

“We had to increase the system size a little at the design stage in order to meet the BREEAM guidelines for carbon points/credits as these are linked into planning approval,” said Lenihan. “We also altered the pitch from 40° to 20° to reduce potential shading between panels during the winter.”

Although not specifically providing power to illuminate Up at The O2, the concept behind the installation was to offset the additional electricity consumption from the grid that would have occurred without the project.

“To meet the project targets the solar installation had to generate 9,851kWh for the south roof and 8,513kWh for the north,” stated Lenihan. “This equates to approximately ten percent of what the venue expects to consume in a year.”

In financial terms, using an average electricity cost of 12p per unit, the offset costs equate to around £1,200 per year for the south installation and £1,020 for the north. The Arena also expects to save a further £2,800 a year from the government’s Feed-in-Tariffs, which can be factored into the payback period.

“The project anticipates return on investment in seven to eight years, but because the installation is helping to generate a new revenue stream for the venue, it will be shorter in reality,” Lenihan said. “Other contributory factors include low running costs, virtual maintenance-free operation, and a life expectancy in excess of 25 years.”

From an environmental perspective, Rayotec calculations show that the project will save around 10,400 kg of CO2 per year compared to drawing power from the grid in a conventional manner.

“Energy efficiency and environmental responsibility are now expected of almost all commercial organisations, particularly ones as large as The O2, operated by AEG who have their own energy reduction targets published in AEG 1Earth,” concluded Lenihan. “It was a tricky project because of the unusual nature of the structure, but getting the design right and selecting innovative technology ensured a quick and straightforward installation, and ultimately a happy customer.”

ECS to embrace the 18th Edition