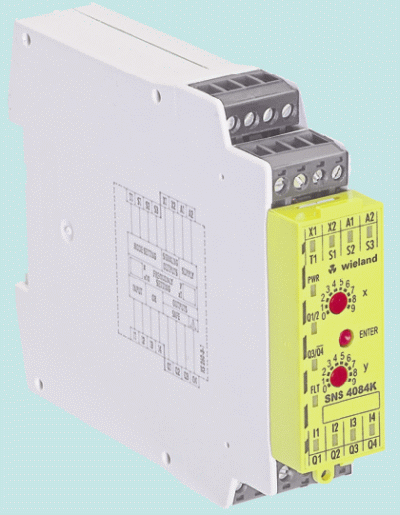 The range of standstill monitors available from Wieland Electric has recently been extended with the addition of the new SNS 4074K. This new device monitors the pulse frequency of sensors, such as inductive and magneto-resistive proximity switches and incremental encoders. It will then safely switch off any dangerous movement when the limit frequency set on the safety module is exceeded.

Designed to protect machine operators from dangerous movement, standstill monitors are predominantly used in the control of tumblers in electric locking facilities. Access to dangerous machine parts is only possible when the machine movement no longer poses a threat to the operator.

Wieland now offers two such devices with different functionality – the SNS 4074K with a bypass input, which allows safety orientated bypassing of the monitoring function, and the SNS 4084K which has an input for the implementation of a start override that allows electric locking facilities to be locked during start-up. The limit frequency to be monitored is adjustable between 0.1 and 99Hz and is set via two rotary switches. This is permanently stored in the device via a simple configuration process.

The SNS Series standstill monitors measure only 22.5mm in width and are equipped with either pluggable screw terminals or spring terminals. The devices can be used in safety applications up to PLe (Cat 4) according to EN ISO 13849-1 and can be used with any machine drive technology. In addition, Wieland’s standstill monitors also have the capability of being retro-fitted into existing machinery or systems.

Delmatic’s new website – A must for lighting control specification