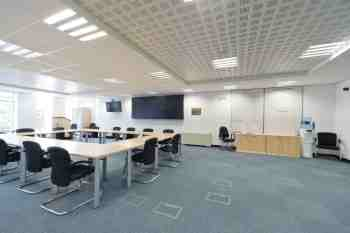 Cable management manufacturer, Marshall-Tufflex, has provided a variety of its products to ensure the on-time and successful re-fit of Ireland’s newly refurbished Department of Transport, Tourism & Sport building in central Dublin.

The five storey building is also now home to the relocated Irish Coast Guard’s Marine Rescue Coordination Centre, which operates its emergency search and rescue operations from this hi-tech base.

Marshall-Tufflex’s Republic of Ireland & Northern Ireland sole distributor, Core Electrical, worked closely with the OPW (Office of Public Works) and electrical contractor Mercury Engineering, recommending a number of products from Marshall-Tufflex for the project, which involved the upgrading of two buildings in central Dublin. The time pressured contract required Core Electrical to advise on the electrical specification plus supply systems selected to deliver a cutting edge facility with power/data supplies upgraded and future-proofed, in some areas up to Cat 7 compliance.

Central to the success of the refurbishment was the specification of Marshall-Tufflex’s prefabricated MT32 pre-wired underfloor power delivery solution, which reduced labour time by approximately 200 hours, according to Donal Hackett, of building services contractor Mercury Engineering. Mercury worked alongside the OPW and Walls Construction on the project. Core Electrical consulted and supplied the Marshall-Tufflex products.

Frank Reilly, from the OPW, said, “Mercury Engineering put Marshall-Tufflex’s MT32 system forward and we evaluated it alongside the alternatives. We liked the fact that MT32 gave us greater flexibility for future-proofing, plus there were significant cost savings to be made.”

Mercury Engineering also installed Marshall-Tufflex’s Cat 6 compliant PowerPoles to carry power and data from ceiling level to desks in Department of Transport offices. Where cabling services are contained within partition walls, Marshall-Tufflex’s EMC/LSOH MT Supertube was used because of its ease and speed of installation combined with ‘bendability’ over traditional steel conduit.

Fundamental to the re-fit was the upgrading of structured cabling to a Cat 6 installation in the main office areas and to Cat 6A in the majority of the Marine Rescue Coordination Centre.

The project also included the re-fit of an adjacent five storey Georgian building that provides further office accommodation for the Department. Here Marshall-Tufflex’s Cat 6 compliant all-curved Odyssey PVC-U cable containment system was recommended by Core Electrical as being the most ‘pleasing to the eye’ surface mounted trunking solution designed to minimise interference to the fabric of the building.