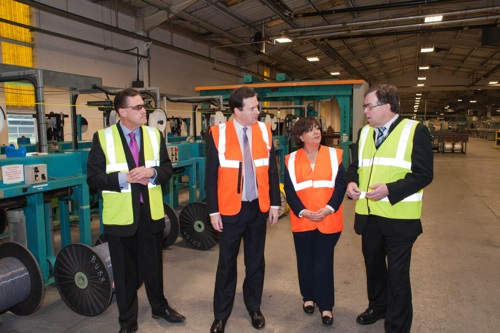 The visit was prompted by recognition of the huge investment that Prysmian is making in the UK. Committed to supporting its UK manufacturing operation in the long term, Prysmian has invested over £15m in its four manufacturing sites over the last six months including £2m to develop a new high voltage testing laboratory at Eastleigh.

Prysmian is also critical to several major infrastructure projects such as the Western Link submarine connection between Scotland and England. This contract was awarded in 2012 and uses cable technology unique to Prysmian. Supporting this contract also involved the company acquiring the London-based submarine cabling business Global Marine Technology.

Both Osborne and Hutchings expressed their support for this significant product sector with Hutchings describing cabling as “the backbone of modern buildings,” while Osborne recognised that, “Fibre optic cabling is absolutely crucial to the future development of our communications infrastructure” and declared the Prysmian facility “very impressive”.

Paul Atkinson, CEO Prysmian Group UK, took the opportunity to raise the issue of substandard cable imports, reiterating a call for adequate legislation and policing of cable standards. Without such legislation high quality manufacturing companies suffer from the impact of cheap imports that do not conform to specified quality standards, are unsafe and potentially life threatening.

Atkinson drew the MPs attention to the number of cable manufacturers that have closed their UK operations over the last decade and suggested that more government support for engineering-based manufacturing skills should be high on the political agenda.