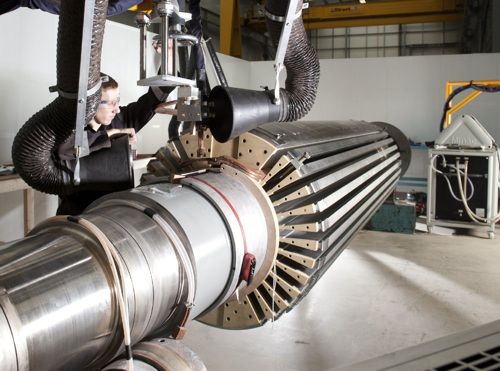 When the rotor on a T240-370, 154MVA generator at the Takoradi Power Station in Ghana suffered a double earth fault resulting in severe arcing damage, TAQA, one of the largest independent power producers in the Middle East and North Africa, turned to the UK-based electrical engineering group, Quartzelec, to deliver a six month refurbishment and rewinding programme for the failed machine.

The damaged rotor, which measures eight metres in length and weighs 36.5 tonnes, failed in May 2011 and was substituted with a new spare rotor purchased from the OEM to allow the unit to continue operating.

One of the generators had previously experienced a rotor earth fault which had been repaired locally but this most recent double earth fault resulted in severe arcing damage in every slot along the wedge dovetails and on the retaining rings of the rotor, rendering the machine unusable. Two deep excavations (one 250mm and the other 300mm axially) were found within two of the forging slots where material had vapourised at the site of the earth faults. In addition, more than ten percent of the copper winding on the rotor had either been melted away or become distorted – therefore unrecoverable.

“This was an interesting and challenging project,” stated Steve Cooper, business development for power generation at Quartzelec. “With a replacement generator costing in excess of £2m, the client was looking for a technically competent yet commercially viable solution to re-establish full generating capacity. An initial damage assessment had been undertaken by the OEM but we were awarded the contract based on our technical expertise and extensive experience in electrical repair and maintenance. As an ISP we were able to demonstrate our proficiency in terms of technical ability, cost effectiveness and more importantly turnaround, even though it entailed shipping the rotor components several thousands of miles to enable the right refurbishment equipment to be used. What’s more, TAQA has followed this contract up by awarding us another opportunity – to refurbish a failed TKJ86-16 brushless exciter as well as inviting us to its Abu Dhabi headquarters to present a repair paper to all TAQA Plant Managers on the successful completion of the Takoradi programme.”

The rotor components were transported to Quartzelec’s purpose built and newly commissioned Rugby UK facility where further inspections were carried out. This resulted in a complex weld repair being carried out on the two damaged slots in order to salvage the forging. A series of replication tests were then conducted. Arcing damage along the slot dovetail was also machined off, increasing the dovetail dimensions and a new set of the retaining rings, snap rings and wider wedges were procured. The rotor was then rewound using about 80% of the existing copper and a new design of insulation system. New end winding packing blocks were also designed, manufactured and fitted.

In order to confirm overall mechanical integrity of the forging and new components, a set of NDT tests and a 120% overspeed test were performed. These were then followed by a comprehensive dynamic set of final electrical and mechanical tests before the rotor was suitably packed and shipped back to Ghana where it was swapped with the in-service rotor during February 2013.

“I really had no doubt on the success of the final test,” commented Kirk Butler, director, O&M, Power & Water for TAQA following the successful final testing of the rotor at Quartzelec’s new facility in Rugby. “This was a very important project for both Takoradi and TAQA and we are very pleased with the outcome.”

Takoradi Power Station is a thermal power plant that comprises two GE Frame 9E combustion gas turbines and has plans to add a steam turbine, to give a combined output of around 330MW. It’s located on the southern coastline of Ghana and services the country’s western industrial and commercial region including the twin cities of Sekondi and Takoradi.