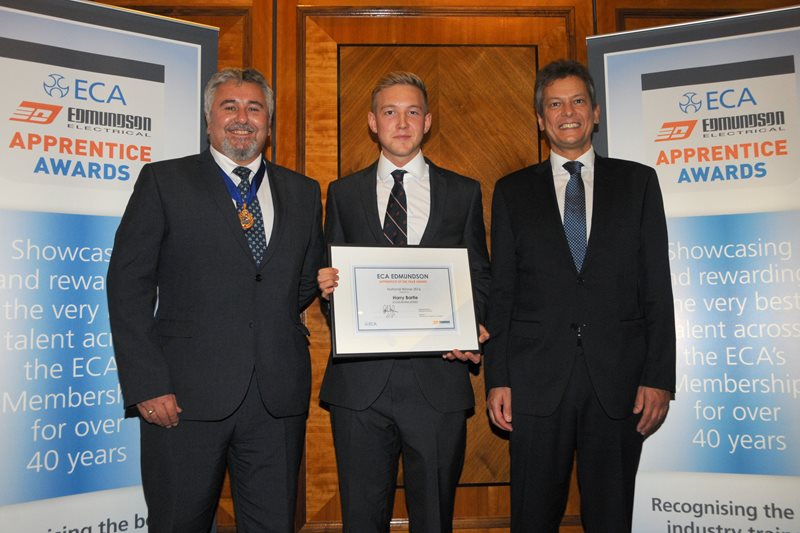 The leading electricians and engineers of the future are being urged to enter this year’s ECA Edmundson Apprentice of the Year Award, after the prize officially opened.
Anyone working for an ECA member-organisation who has completed their apprenticeship and passed the AM2 electrical installation qualification after 1 January 2016 can enter. Please click here to complete the online application process, which for the first time includes a video element.
There are an array of prizes and opportunities on offer to those entering the awards, including:
Edmundson Electrical Managing Director, Mark Felber, said:
“Edmundson Electrical has trained hundreds of apprentices and continues to significantly invest in the development of our staff. Through the ECA Edmundson Award we aim to identify young people who can be great ambassadors for our industry and also demonstrate to companies the benefits of investing in apprenticeships.”
ECA Chief Executive Steve Bratt commented:
“The ECA Edmundson Award provides industry-leading recognition of talented young engineers and the extensive support that members give to developing their employees.
“The electrotechnical industry is unique in the high level of investment it makes on training. We are confident that this year’s award winners will, once again, show that the industry is a great place to start and develop an engineering career.”
Last year’s Apprentice of the Year Harry Bartle of Chris Bowker Ltd says his career has gone from strength-to-strength since receiving the award.
2016 ECA Edmundson Apprentice of the Year, Harry Bartle (see attached image, centre), commented:
“Winning the ECA Edmundson Apprentice of the Year Award has been my greatest achievement. To be recognised and awarded for the success I have had during my apprenticeship is the highest accolade any electrical apprentice could hope to achieve. I have surpassed the expectations I had for my apprenticeship and this has given me great confidence in progressing with my career.”
The deadline for entering the ECA Edmundson Apprentice of the Year Award is Friday 7 April. Shortlisted candidates will then be interviewed by our judging panel during the summer.
The winner will be announced in late September, during a prestigious event hosted by Edmundsons, and attended by a range of industry leaders, including manufacturers and contractors.
The ECA Edmundson Award has been running since 1975 and is one of the longest-standing on the electrotechnical calendar.

Get all the facts for free!