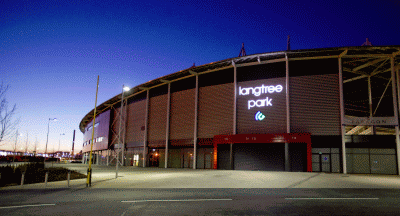 Prysmian’s FP200 Gold has just been installed into the fire alarm and the voice alarm PA system at St Helens RFC’s new home stadium, Langtree Park. The Saints have officially left their old ground at Knowsley Road to begin the new season at the freshly built 18,000 capacity stadium.

As with any public stadium venue, fire safety systems are of paramount importance, and FP200 Gold complies with the requirements of fire alarm standard, BS 5839, emergency lighting standard, BS 5266 and is BASEC and LPCB certified.

This hard skin fire resistant cable incorporates Insudite insulation which surpasses commonly available soft skin silicone cables as it reduces the chances of third party damage during installation. Weak cable insulation can lead to faults that may be difficult to locate within a cable network and even cause false alarms in the future.

Solid State Security was chosen to install the fire alarm and PA/VA systems in the £44m stadium. Lead engineer Paul Turner explained, “Prysmian cables are incredibly easy to strip and this was essential for a job like this as the schedule was so tight. We had ten men working on installing 25,000 metres of cable in just over six months.”

He continued, “The cables arrived on the new FP reel with useful hand grips and this enabled us to get the cabling on-site a lot quicker. We have worked with Prysmian FP200 Gold on a number of projects and we will continue to do so in the future as it is a high quality cable and comes with all third party approvals.”

Solid State Security started the installation in April 2011 and the project reached completion on 24th November 2011. St Helens RFC’s first match at the new stadium will be against Widnes RFC on 20th January 2012.