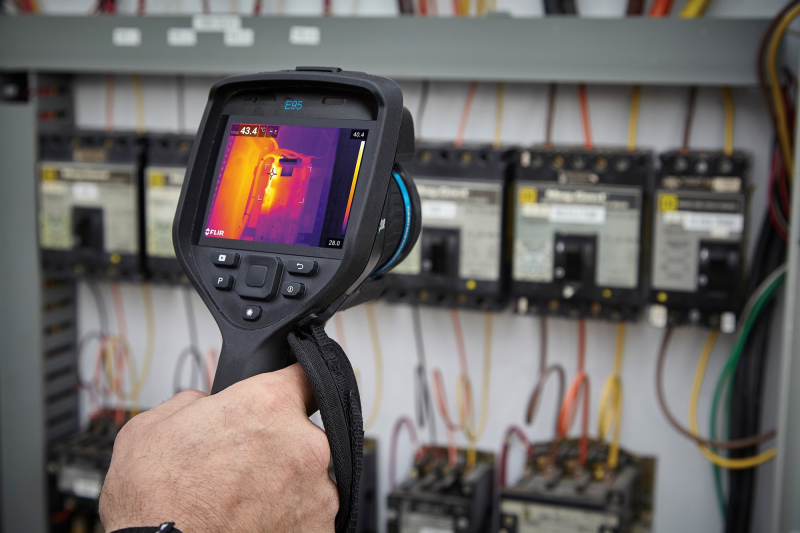 In redesigning the Exx-Series, FLIR developed a new range of compact intelligent, interchangeable lenses that the camera automatically recognises and calibrates, eliminating the need for manual calibration. The Exx-Series now also features laser distance measurement that assures precise autofocus to improve temperature measurement accuracy, and specifically for the FLIR E85 and E95 models, provides the data for on-screen area measurement in square feet or metres. In addition, the FLIR E85 and E95 models offer increased thermal detector resolutions with up to 464×348 (161,472 pixels), and measure temperatures up to 1,500 degrees Celsius.

In conjunction with FLIR Tools, the FLIR E75, E85, and E95 are the first Exx cameras to offer UltraMax, FLIR’s embedded, super-resolution process that improves effective resolution by four times – up to 645,888 pixels – and thermal sensitivity by up to 50 percent. All models also feature significant improvement to FLIR’s MSX technology, which now utilises a 5-megapixel visual camera for improved image clarity and readability. These improvements, combined with a display that is 33 percent brighter and 30 percent larger than previous Exx models, yield more vibrant and detailed thermal imagery.

“Redesigned from the handle up, the new series of FLIR Exx cameras is a significant achievement in terms of advanced functionality, performance, and ease of use in thermal cameras for electro-mechanical, plant, and building inspections,” says Andy Teich, President and CEO at FLIR. “With an ever-broadening base of users who demand thermal cameras that are compact, capable and easy to use, the advanced Exx cameras check every box.”

Oxidisation of high voltage switches, overheated connections, incorrectly secured connections and insulator defects can all be spotted at an early stage with a FLIR Exx camera.  It is ideal for troubleshooting low voltage equipment too, typically for detecting high resistance, corroded and poor connections, internal fuse damage and internal circuit breaker faults.

The FLIR E75, E85, and E95 cameras will be available for sale in March through established FLIR distribution partners and the FLIR.com store. For more information, visit www.flir.com/exx-series

The demands of exporting to the US