ELLIS MAKES CHANGES AT THE TOP AS FOUNDNG CHAIRMAN RETIRES 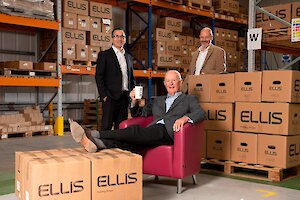 One of the world’s leading cable cleat manufacturers, Ellis Patents has made a series of senior changes at board level following the retirement of founding chairman, Chris Calvert.

Chris, along with a group of shareholders consisting of family, business and cricket-playing friends, bought Ellis Patents from former RAF bomber pilot, Arthur Ellis on his retirement in 1987 – moving their own plastic injection moulding and mould tool-making business, which they’d owned since 1977, from Walkern, near Stevenage, to the Ellis Patents site in Rillington, North Yorkshire.

Over the intervening years, a small local manufacturer has been transformed, through product innovation, into an engineering company with a global reach and a reputation to match. During his 43-years with the Company, Chris has served as both managing director (1977 to 2001) and chairman (2001 to 2020).

Chris will be replaced as chairman by current managing director, Richard Shaw who is stepping back from day-to-day involvement after 19-years at the helm.

The new managing director will be Danny Macfarlane, who has been at Ellis since 2003, during which time he’s held the roles of technical manager, manufacturing manager, operations manager and most recently, operations director.

Commenting on his retirement, Chris said: “I was born and grew up in the Yorkshire Dales and coming back to live and work in the county was one of my ambitions. Buying Ellis Patents in 1987 saw this ambition realised. At the time we bought a business with a broad base of regional electric customers and undertook the opportunity to design and develop new products for them; so to be retiring 33 years later, having achieved so much, shows what a wonderful move it was.”

“I was as impressed then as I am now by the strong work ethic at Ellis, and will always be grateful to all the people whom I have had the privilege to work with over many years. It has been a delight. There has always been a special working atmosphere at Ellis, and I am very thankful to all the people who have helped to create that, and to Richard and Danny for their excellent leadership. I can hang my boots up knowing that the Company is in good hands.”

Ellis recently announced a £½ million expansion of its premises, which means the footprint of its headquarters in Rillington, North Yorkshire has expanded from 7,000 to 50,000sq. ft. during Chris’ tenure. Today Ellis’ cable cleats, which are used to secure large power cables in major new construction and retrofit projects, are in demand around the world; with the company actively exporting to more than 40 different countries.

Outgoing managing director, Richard Shaw, said: “My journey so far at Ellis has been unforgettable – and not just because of the success we’ve enjoyed. The business operates on a different model from others; we’re not driven by profit alone, but by high ethical standards and a philanthropic attitude.”

“Our aim has always been to innovate and improve, an approach that saw us champion the global adoption of standards governing the use of cable cleats; spearhead the improvement in standards for cleating fire resistant cables; take great strides towards being a part of, rather than just a supporter of the circular economy; and become the company that the likes of Siemens, Network Rail and Balfour Beatty turn to when they have cable installation issues. Ellis Patents is a business that should be celebrated both for its achievements and its potential for even greater success in the years to come.”

Ellis’ new managing director, Danny Macfarlane added: “I’m relishing the challenge to continue the excellent work carried out by Chris and Richard. Change, when it comes, will be evolutionary rather than revolutionary, as the building blocks we already have in place are the envy of the industry.”

The future is on the horizon – will you be there?