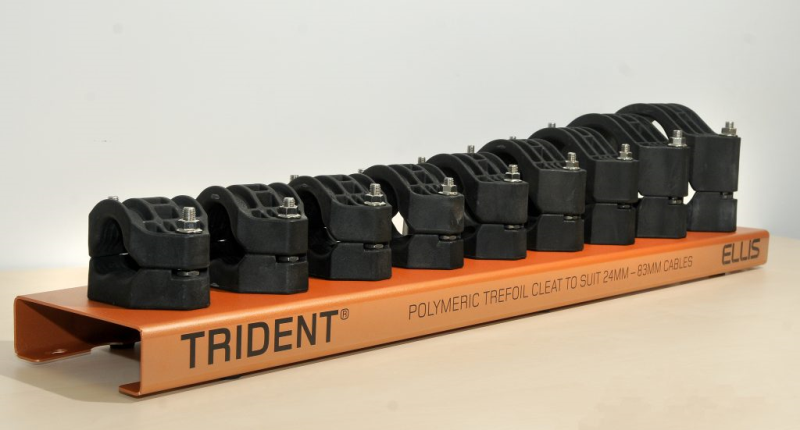 Ellis has extended its range of plastic trefoil cable cleats, making it suitable for electrical cables up to a diameter of 83mm.

Trident, which is a trefoil polymeric cleat, was introduced by Ellis in 2016 in order to give the North Yorkshire company greater traction in Continental Europe where similar products are in high demand. Initially available in sizes ranging from Ø24-54mm, the range now covers Ø24-83mm and features nine different sized products.

Richard Shaw, managing director of Ellis, said: “We developed Trident to put us on a level playing field with those who already manufactured and sold all-plastic trefoil cleats in Europe – especially in Germany and Holland were such products have been popular for a long-time.”

“The success we’ve enjoyed with it since then, both in these specific markets and others – including here in the UK –,  meant we had absolutely no hesitation in extending the range to cover all the most-used cable sizes.”

Trident has an FEA optimised design that is both elegant and cost effective and is manufactured as standard in V0 0H 30 per cent glass filled nylon. It is also available in a London Underground Limited (LUL) approved polymer that meets London Underground standard 1-085. Both versions of the product have been short-circuit tested to IEC61914.

“We pride ourselves on having the strongest and deepest product portfolio of any cable cleat manufacturer,” continued Richard. “And the extension of Trident certainly adds to this, while at the same time opening the door to us making significant sales gains in an area of the market that we’ve not previously been able to fully compete in.”

DO4000: Keeping Rail Resistance Measurement and Testing on Track