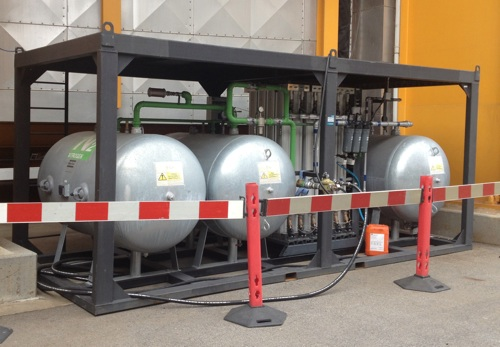 Situated in Gondomar, in the north of Portugal, Tapada do Outeiro combine cycle power station produces 15-20% of the country’s electrical needs.

The company relies on an NG 81 generator from Atlas Copco Rental to supply pure nitrogen to replace the air in the steam generator’s tubes when they are not in use, eliminating corrosion.

The gas is burned in a gas turbine, which is similar in operation to an airplane turbine. The gas from the exhaust, which is extremely hot, goes into the steam generator like a steam boiler, heating the water and transforming it into superheated vapor. The vapor is then used to engage another turbine similar to the ones used in coal thermoplants. An alternator is then driven by both turbines, gas and vapor, creating power.

Carlos Carqueja, engineering manager of the company, explained the fundamental role Atlas Copco Rental’s NG 81 generator has in the operation of the plant. “Nitrogen is used to preserve the steam generators. When they are not in use, air goes into the tubes, so the steam generators can suffer corrosion. The replacement of air by high quality nitrogen eliminates the corrosive effect on the steam generator.”

He also added that, “The rental option, allows us, at a very reasonable cost, to test the technical viability of keeping a very poor oxygen atmosphere with the nitrogen generators for long periods.

After two months, Tapada do Outeiro is very satisfied with the quality and reliability of the equipment, which has required no maintenance since it has been in operation. The company is also pleased with the technical team supporting the equipment. “I would not hesitate to recommend a rental solution from Atlas Copco to other plants with the same needs,” stated Carqueja.