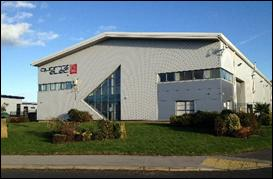 A long-standing Quartzelec customer, the Bedford based Aircraft Research Association (ARA) operates and maintains a number of test and research facilities including a transonic wind tunnel which can accommodate a wide range of aircraft models and test types. Much of the facility’s rotating plant had been in operation for over 60 years, and Quartzelec was called in to review the original design with a view to replacing the DC motor and motor-generator set with modern technology.

A detailed analysis of the complete electrical set-up was undertaken and recommendations for improvements were submitted in late 2012 which resulted in the award of a £515,000 contract to carry out a body of work.

All the renovation work was carried out on the ARA site in Bedford by highly experienced Quartzelec personnel with support from on-site ARA engineers and with various key components being fabricated off-site by several suppliers. The work included the replacement of the existing motor-generator set controls with a 12-pulse thyristor-controlled DC drive; replacement of the existing 1200HP DC pony motor originally manufactured by English Electric,Stafford; and the overhaul of the existing DC pony motor for use as a spare.

Part of the upgrade was to replace the Ward Leonard (MG Set) with a drives control panel to drive the DC motor and a series of meetings were held between ARA and Quartzelec to review the proposal and agree the final design and schedule, prior to manufacture. Key suppliers were also regularly visited during the fabrication phase and factory acceptance was completed prior to final installation.

During the contract delivery phase, Quartzelec also received the go ahead for the refurbishment of the main AC motor. This element of the project commenced prior to the scheduled Christmas 2013 shutdown and was completed before the end of January 2014, just ahead of completion of the main contract, and in preparation for the next phase of customer analysis work that required the use of the wind tunnel.

“This was a really interesting, challenging and historic project to be involved with,” explained Harish P Mistry, the senior project manager at Quartzelec who was responsible for seeing the project through from the initial briefing to final commissioning. “The test facility was opened in 1956 and much of the original high voltage electrical equipment at this site was still in use. Elements were however beginning to show signs of wear and fatigue although it was still performing as initially envisaged which is testimony to the original fabrication and design. While technology has moved on apace and computers are involved in so many aspects of our everyday lives, traditional physical testing is still an important part of modern development and the recommendation for replacements and improvements we implemented now enable the ARA to continue to provide and deliver this important and much used resource.”

A key project requirement was to tightly manage the fabrication and delivery schedule for the new DC motor to ensure minimal downtime and disruption to ARA’s customer testing schedule. Quartzelec completed the installation and commissioning of the new equipment in early February 2014 and the wind tunnel is now fully operational again, much to the delight of ARA and its customers. Training is now also being reviewed by ARA and enhancements to the way its personnel now operate and interact with the equipment is being developed.

The Aircraft Research Association wind tunnels are used to test scale models of aircraft and weapons to obtain data that is critical for its customers to assess their air vehicle’s aerodynamic performance. Providing a key link in the aircraft development cycle this facility enables the aerospace industry to validate and complement computer-based analysis or to investigate physically complex flows with a speed and reliability which is still beyond even the most powerful of today’s computer based simulation capabilities.

Quartzelec has an annual turnover in excess of £60m and a heritage that stretches back more than 80 years with the ability to design, manufacture, repair, refurbish and rewind large, project critical motors and generators, relying on its extensive library of design drawings and a full design department. It also has a rapidly expanding electrical contracting business and has the ability to work on any OEM-manufactured machine and/or equipment, including those built by its previous heritage companies such as GEC Machines, GEC Alsthom Large Machines, ALSTOMand Cegelec.

Time is vital in an emergency

Gooee adds a Lux Award to its list of 2016 achievements