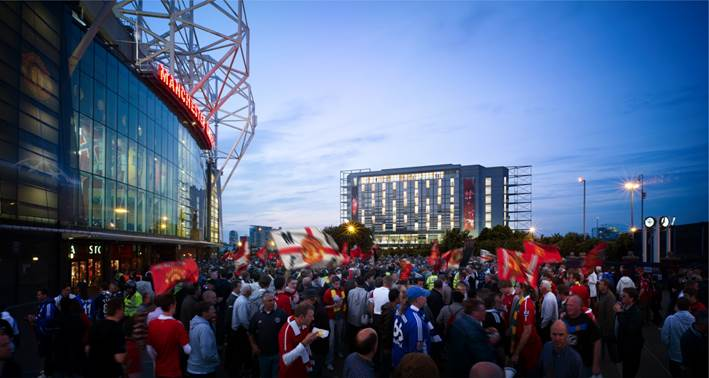 Draka branded Universal Cabling (UC) Connect system is to be installed throughout Hotel Football, a football themed hotel under construction on a prominent site next to Manchester United’s Old Trafford stadium. Draka’s space-saving Cat. 6 cabling system was proposed by one of Draka’s installation partners Abzorb after they secured the contract to install the voice and data network cabling and a 200 point digital TV distribution system at the development.

The 139-roomed football themed hotel will be home to the Old Trafford Supporters Club, which is housed in the basement. In addition, the hotel will feature a ground floor restaurant and shop, a mezzanine lounge and a first floor conference space; above which are seven floors of hotel rooms. The building is crowned by a roof-top mini five-a-side football pitch which doubles as an event space.

Cable distributor Comtec Cable Accessories recommended Draka’s UC Connect cabling system to Abzorb several years ago. It is now Abzorbs preferred solution for both Cat 6 and Cat 6a and has been installed by Abzorb in a variety of projects across the country.

Kev Hall of Abzorb said, “Not only is Draka Cat 6 solution extremely competively priced, it is also very installer friendly and we recommend it to our clients before any other system”.

Draka branded UC Connect System is a complete cabling solution for enterprise and datacentre communications networks. Contractors can be confident in the cable’s quality, which has approvals as part of a 3-connector link and 4-connector link channel. As with all Draka UC branded cables, the product comes with third party approval for cable performance.

Designed by AEW architects, the £23m football-themed hotel and club is being developed by GG Hospitality, a management company set up by former Manchester United players Ryan Giggs and Gary Neville and The Old Trafford Supporters Club. It is due to open Winter 2014.