Does your insulation pass the test? 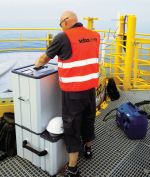 When a cable develops a fault the consequences can lead to disruption and expense. However, as Megger’s Damon Mount explains, there are some simple test techniques that can be employed to ensure cables and joints are in good condition

Cable insulation testing can play a vital role when trying to detect deteriorated or damaged insulation. However, what’s the best way to test cable insulation?

Ideally cables would be tested at power frequency, so that the stresses produced during the test would closely match those that the cable experiences in normal operation. Unfortunately, cables are highly capacitive and, to supply the reactive power needed to charge a long cable at power frequency, an insulation test set needs to be big, heavy and expensive. Power frequency testing is, therefore, not commonly used.

DC insulation testing, typically carried out at 1kV or 5kV, is a popular method as DC test sets do not have to supply reactive power to the cable. Therefore, DC test sets can be made small, relatively light in weight and easily affordable. They also provide a very fast and convenient way of checking insulation condition – the typical test duration is one minute.

Because these tests are carried out at these modest DC voltages they are non-destructive and are unlikely to exacerbate any existing faults.

This form of insulation testing therefore provides a first line insight into cable insulation condition, and is good at providing a guide to the presence or absence of serious faults.

However, there are other tests that are more useful when it comes to providing detailed information about general degradation or ageing of the insulation. This can offer a suggestion that the cable is at risk of failure in the near future.

One way of doing this is to stress the cable further by DC testing at higher voltages – often two or three times its normal working voltage. There is evidence, however, that high voltage DC testing encourages the development of water trees in XPLE cables, which can eventually lead to insulation failure.

Fortunately, there is another approach – testing the cable with AC at a very low frequency (VLF) – typically 0.1Hz. At this frequency, the capacitive reactance of the cable is high, so the test set does not need to supply much reactive power and, because testing is carried out with AC rather than DC, the water tree growth is not encouraged.

Essentially the range of VLF test sets that are available are divided into those that use a sinusoidal test waveform and those that use a cosine rectangular waveform. Testing with a sinusoidal waveform can be combined with other forms of testing, such as tan delta measurement and partial discharge diagnostics, and is therefore often the preferred method. However, the VLF test frequency differs by a factor of 500 or 600 from power frequency, and this must be taken into account when interpreting the results of these other tests.

There is a particular benefit to the cosine rectangular waveform. Although it closely resembles a square wave, careful examination of the rising and falling edges of the waveform shows that they closely match the rising and falling edges of a sine wave at power frequency. In other words, the stresses produced in the cable insulation during testing with a cosine rectangular waveform are very similar to the stresses the cable insulation experiences during power frequency operation.

Both tests have a role

As we have discussed here, DC testing at voltages up to 5kV and VLF AC testing both have a part to play in evaluating the condition of insulation in power cables.

In practice, it is preferable to have the test equipment needed for both types of test on hand. And it’s worth bearing in mind that, if this test equipment helps to prevent just one cable failure, the resulting cost savings could easily repay many times over the investment made in buying it.

Walk-in chambers designed to be E-fficient