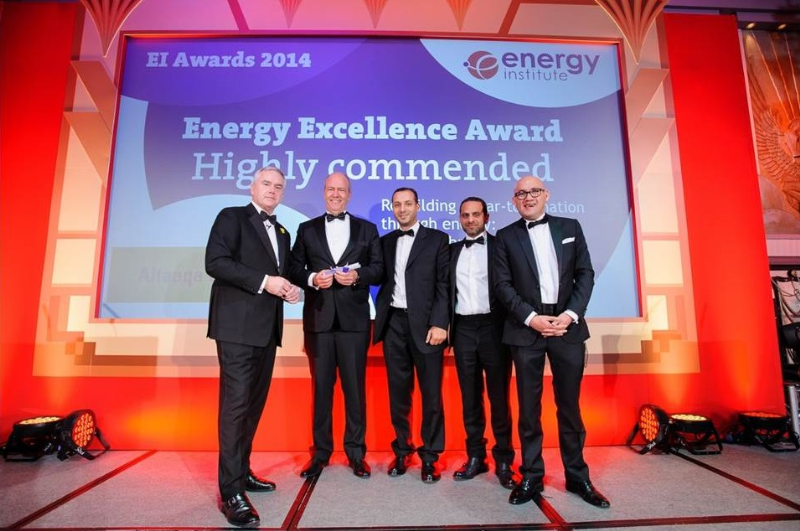 Altaaqa Global, the global provider of temporary power solutions, was highly commended for the Energy Excellence Award for its 23-day installation of a 54 MW power plant in Aden, Yemen, at the 2014 Energy Institute Awards held on November 13th at the Sheraton Park Lane, London, UK. With its entry, titled “Rebuilding a War-Torn Nation”, Altaaqa Global was shortlisted for the accolade among a stellar pool of nominees, including the International Association of Oil and Gas Producers, the UK Ministry of Defence, and Open Energi and Aggregate Industries.

The Energy Excellence Award is intended to give recognition to an outstanding feat in the energy industry, bannering fresh thinking and strategic problem solving. To be qualified for the award, a company or a project’s attainment should have the greatest impact on all parts of the industry. As the organisers put it, the award spans all the other categories, and represents the pinnacle of achievements in the energy industry.

Commenting from the event, Peter den Boogert, general manager of Altaaqa Global, said, “We are proud yet humbled to be recognised by the highest energy body in the UK. This recognition is a testament to the hard work that the men and women of Altaaqa Global have given to the project, braving security instability and the harshest weather conditions. We, furthermore, extend our sincerest gratitude to the local Yemeni engineers that joined us in completing this historic project.”

Majid Zahid, strategic accounts director of Altaaqa Global, attributed the achievement to the people of Aden, Yemen. “We share this distinction with the people of Yemen, including the country’s leadership, who trusted us with providing the much needed electricity as they were rebuilding their nation. This project met myriad challenges, but we drew the strength and tenacity to go on from their faith and hope. Moreover, this project would not have been as meaningful without the positive response that the people of Yemen have shown towards our energy conservation and efficient usage campaigns.”

Steven Meyrick, board representative of Altaaqa Global, said that this recognition would further encourage the company to improve on its processes and take on projects that push the envelope of engineering ingenuity. “This high commendation from the Energy Institute substantiates the progressive steps that Altaaqa Global has been taking towards achieving the highly ambitious goals that we have set for ourselves. We will continue to challenge ourselves in every project that we do and to build on the innovation that we have introduced in the past.”

Altaaqa Global’s 54 MW project in Aden, Yemen was installed and completed as the country was recovering from the effects of the Arab Spring. Built in a mere 23 days, the temporary power plant was able to supply electricity to more than half a million people. The success of the project prompted the government of Yemen to add 50 MW to the existing installation, bringing the total capacity of the power station to 104 MW.