£1 million boost for renewable energy in the South East

Nearly £1 million of smart investment in the South East’s electricity network is set to pave the way for new generators of renewable energy to connect to the grid. 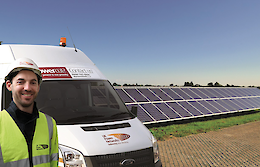 UK Power Networks is rolling out new ‘load blinding relays’ across Kent, Surrey and Sussex to unlock capacity for new connections. The £932,000 project will see the devices installed on 80 transformers across 35 sites, from now until 2024.

In total the new protection relay technology will release 469 Mega Volt Amperes (MVA) – unlocking enough capacity to install a rooftop solar panel on 127,445 houses. That’s the equivalent of connecting a new solar panel on every house in a town the size of Eastbourne, East Sussex. Installing the new smart devices is also significantly cheaper than replacing existing equipment or building new, and the South East was chosen because it already hosts many wind and solar farms.

Director of Asset Management Barry Hatton said: “We’re excited about this programme because it shows just how far we can go if we think a bit differently and re-imagine what’s possible on our network. Strategic, smart, specific investment like this, is exactly how we plan to help enable Net Zero by 2050.”

Traditionally, protection devices switch off parts of the electricity network if faults occur. They are used to keep employees and the public safe and protect the company’s electricity networks across London, the East and South East, which include more than 170,000 generators of electricity and enough renewable energy to power 3.5 million homes. The new smart devices can tell if power flows are related to a problem on the network or not, so they release more network capacity by safely allowing more power through.

Increasing the UK’s use of renewable energy like solar and wind is a key part of reaching the national Net Zero emissions target by 2050. Energy generation currently makes up 23% of total UK emissions, however since 2013 the carbon intensity of the UK’s energy system has dropped by more than 65%.

UK Power Networks has already connected more than 7GW of renewables and forecasts this will double by 2030, meaning 80% of homes and businesses will be powered by clean energy.